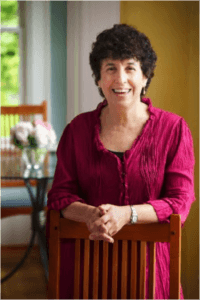 All Souls’: An Interview with Rhea Tregebov

Rhea Tregebov’s seventh collection of poetry, All Souls’, was released by Signal Editions/Véhicule Press (Montreal) in September, 2012. Maisonneuve writes of All Souls’ that Tregebov’s “use of language is effortless, allowing the book to contemplate – sometimes quietly, sometimes more forcefully – the way in which small moments speak to a larger human consciousness.” Anne Michaels writes: “For decades, Rhea Tregebov has been writing poems of penetrating honesty. At their core is a deep familiarity with the necessities of love; inconsolable loss, inconsolable hope…” Tregebov’s poetry has received the Pat Lowther Award, The Malahat Review Long Poem prize, Honourable Mention for the National Magazine Awards and the Readers’ Choice Award for Poetry from Prairie Schooner.

Tregebov is also the author of a historical novel, The Knife Sharpener’s Bell (Coteau 2009), which won the Segal Prize in literature and was shortlisted for the 2012 Kobzar Prize. In addition to her poetry and fiction, Tregebov has also published five children’s picture books, including The Big Storm and Sasha and the Wiggly Tooth. She also has edited numerous anthologies, including a collection of translations from Yiddish, Arguing with the Storm: Stories by Yiddish Women Writers (Sumach Press, 2007; The Feminist Press CUNY, 2008).

The following poems are from All Souls’. 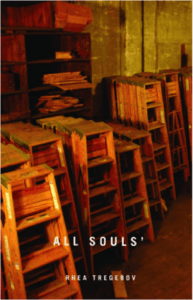 Here it is exactly: beauty and decay.
Though nothing is exact about
this town: walls as much mountain as wall,
crevices sparsely in flower. Drystone
fences marking the fields, wattle fences,
their branches laced into the grid of wire.
This place makes me think
crooked, different from the machined
thoughts of the city. Euclid was a dope.
Try to calculate the area of that irregular
field beyond the rusted railing, the garden
rough below the terrace, its order,
disorder. A pebble budges. Or
the azalea bush, spottily in bloom,
one of its bright petals shifting in a bit
of wind. The infinite perimeter of this
tuft of grass, moss on the rock below.
The distance between there and here.

Standing on one foot

at the top of the stairs
holding in one hand an old
blue enamel bowl sloshing
with bright strawberries, pulling
on my sandals with the other, I stop
to know what I should know. That I shouldn’t
be testing the slack-rope of this
carcass I inhabit. Plunk the foot,
the bowl, down, sit. Once I balanced
fine in a body I didn’t know
was temporary. Heel-toe, heel-toe the trick
the physio taught my mother to keep her
walking at 85. It’s so simple,
she says.

I’m such a sorry mess I’ll miss it, I’ll miss the traffic,
the exhausted diesel fuming from trucks past my bedroom window,
the bad drivers, the rude, the witless drivers, the ones who honk
as the light turns red. I’ll miss my busy friends, even the ones
I hardly see, the ones who send me only Christmas letters,
the ones who don’t. I’ll miss dog turds rising from the black
melting ice, will miss computer spam, fax machines that smudge
only the important words. I’ll miss its second-rate world-class status.
And Dufflet’s. And Dooney’s. All the bars I could drink in
now they’ve banned smoking. I’ll miss my house quaking
in the streetcars’ wake and the valiant dandelions and the grit
I wipe from the windowsills daily. I’ll miss the spent needles and condoms
in the playground, the black squirrels chomping my crocuses.
The crocuses I’ll really miss, the yellow and purple and white
white white against the grey-brown snow. I’ll miss the sun as it
negotiates the smog and smear of my wide windows,
slick and smart and self-conscious across the hardwood.
Nobody will ever love this city like me.
Nobody would want to.

I picked you up. I picked you
up and put you under my arm.
I tossed you in the air.
You were that small.
Nothing had hurt you.
You didn’t know hunger,
you didn’t know cold.
For a little while I kept you
from harm.

TTQ – What inspired you to start writing poetry?

Rhea Tregebov – I was sick a lot as a kid, stayed home from school living in my imagination, very immersed in reading. So that living in my head was what got me started as a writer. Why it was poetry that drew me is a little more obscure, but I think it was in part a distrust of the causality (this happened because of that) that plot implied and in part a strong sense of the value of what went on in my, and by extension, others’, heads – that interior life.

TTQ – How difficult is it for you to write a great poem?

Rhea Tregebov – Very rarely does the writing come easily. There are a few poems that have come just as gifts, but mostly it’s a question of revision after revision and a lot of sweat in working through to get it right. It feels like I often start with an amorphous block of marble and then have to write my way through, chipping away to the shape of the poem inside. In terms of figuring out what is my best work, that’s pretty hard too, but luckily I have some very adept fellow writers who help me out with that evaluation.

TTQ – What was the genesis behind your latest collection of poetry All Souls’ (Signal Editions/ Véhicule Press (Montreal), 2012) and is there a specific message you hope your readers will take away with them after reading it?

Rhea Tregebov – I wrote this book over eight years while I was also writing my first novel and working on a couple of other projects. So that long span of time covered a lot of changes in my life, a new city, a new partner and family, my son growing up, my parents ageing, and many of the poems respond to and puzzle through these events. It was exciting to feel that I was taking on a somewhat new voice with this book, allowing myself a more terse structure to work within, as well as the longer conversational poems that characterized the last few books. In terms of what I’d hope readers would take away from the book, the message that drove me was not only Rilke’s “you must change your life” but also “your life must change”. So if readers get any help with either kind of change, I will be very happy. There is also in the book a strongly expressed concern with the ecological challenges we face, and I feel that the “Land Claims” section of the book addresses that in a fruitful way.

TTQ – How painstaking was the editing process for you in writing All Souls’ and who helped you with the editing of the book and was their input vital to you in getting the book completed?

Rhea Tregebov – The editing process was one of the best experiences in my life as a writer. Carmine Starnino is the series editor, and he fully engaged with the book, very much helping me believe in it, and also persistently challenging any easy assumptions I had. He is such a skilled writer himself, and so both his micro- and his macro- level comments were incredibly astute and helpful. I had thought the book was completed when I submitted it to him, but in fact his initial input helped me write new poems, and then we worked, often very substantively, to revise poems that I had thought were done. I feel it is a much better book than the one he accepted for publication.

TTQ – What was your writing process like for All Souls’ in terms of environment, surroundings and the number of hours you spent writing each day?

Rhea Tregebov – I had started working full time as a professor at UBC, and for the first time in my life had financial security while I wrote, so that was astonishing to me, after a lifetime as a freelancer. I was also very very involved with my students, which alternately inspired me, as I’m working with very talented and dedicated young people, but it was also a challenge in terms of managing my time in a different way. I caught on pretty quickly to the new scheduling, though, and got into the rhythm of writing very intensely during the portions of the year when the formal classes had ended or were in hiatus. During revision I am able to work a good eight hour day. But when I’m composing new work, a half day feels very much like a full day and then I have to get up and go for a run or do something to shake myself up. Otherwise my head will explode.

TTQ – How different are the poems in All Souls’ in terms of form and style from your first six collections of poetry, and do you find it more difficult to remain original as time goes by?

Rhea Tregebov – As I note above, I feel the shorter, sharper poems are quite new for me. I’m fond of one-syllable words too; feel like bricks in a wall. I have had big worries about repeating myself, or getting too smug, and it’s even easier for that to happen when you’re in the comfy chair of a professor. But Carmine was unremitting in pointing out moments or poems where I got facile, and I feel the book is not self-indulgent. Also, life keeps giving you more to write about, if you’re alert to it and not too wedded to a former self or nostalgic about what has been lost rather than gained. So I’m hopeful that I can keep on “making it new”.

TTQ – How do you best deal with writers block?

Rhea Tregebov – Reading work that I admire is the biggest help, whether it’s Shakespeare or Sheryda Warrener or Linda Besner, who just put out their first books of poetry a year or so ago. Switching gears by switching genres is also a help. I do some translation, and that is a great way to engage with technique while putting your own ego concerns to the side for a while.

TTQ – What is your opinion on the current state of poetry and do you think poetry is currently going through a resurgent period in time?

Rhea Tregebov – I am stunned by the talent that I see in the newest crop of poets, and the energy that they continue to have to devote to the genre. I think it is a bewildering world, and there are questions that poetry is especially apt at answering. While mainstream publishing is struggling so mightily, poetry has always been at the margins, and so is less affected by some of the structural challenges; it’s a little quicker on its feet. I’m very optimistic.

TTQ – How important to the writing process is reading your poetry in front of a live audience?

Rhea Tregebov – I’m very rarely nervous and love to give live readings, though I don’t use the Spoken Word conventions to enhance the performance. When I’m feeling brave enough, it’s good to read work in draft to a live audience, as any artificiality seems immediately evident. And I get a lot of energy back from an audience. After those months and years of sitting at a desk, the work suddenly becomes real.

TTQ – What’s next for Rhea Tregebov?

Rhea Tregebov – I am working on some new poems that didn’t get done in time for the book. Also obsessed by a new novel, my second, which is about 60 pages into a first draft at present.